The capital city of Pakistan, Islamabad is located in the northwest of the country on Potohar Plateau. This area has been significant in history for being a part of the crossroads of the Rawalpindi and the North West Frontier Province. The city was built in 1960 to replace Karachi as the Pakistani capital, which it has been since 1963. Due to Islamabad’s proximity to Rawalpindi, they are considered sister cities.

Compared to other cities of the country, Islamabad is a clean, spacious and quiet city with lots of greeneries. The site of the city has a history going back to the earliest human habitations in Asia. This area has seen the first settlement of Aryans from Central Asia, ancient caravans passing from Central Asia, and the massive armies of Tamerlane and Alexander.

A commission was accordingly set in motion in 1958, entrusted with the task of selecting a suitable site for the new capital with a particular emphasis on location, climate, logistics and defense requirements, aesthetics, and scenic and natural beauty.
After extensive research, feasibility studies and a thorough review of various sites, the commission recommended the area North East of the historic garrison city of Rawalpindi. After the final decision of the National Cabinet, it was put into practice. A Greek firm, Doxiadis Associates devised a master plan based on a grid system, with its north facing the Margallah Hills. The long-term plan was that Islamabad would eventually encompass Rawalpindi entirely, stretching to the West of the historic Grand Trunk road.

Islamabad nestles against the backdrop of the Margallah Hills at the northern end of Potohar Plateau. Its climate is healthy, pollution free, plentiful in water resources and lush green. It is a modern and carefully planned city with wide roads and avenues, elegant public buildings and well-organized bazaars, markets, and shopping centers.
The city is divided into eight basic zones: Administrative, diplomatic enclave, residential areas, educational sectors, industrial sectors, commercial areas, and rural and green areas.

The metropolis of Islamabad today is the pulsating beat of Pakistan, resonating with the energy and strength of a growing, developing nation. It is a city, which symbolizes the hopes and dreams of a young and dynamic nation and espouses the values and codes of the generation that has brought it thus far. It is a city that welcomes and promotes modern ides, but at the same time recognizes and cherishes its traditional values and rich history. 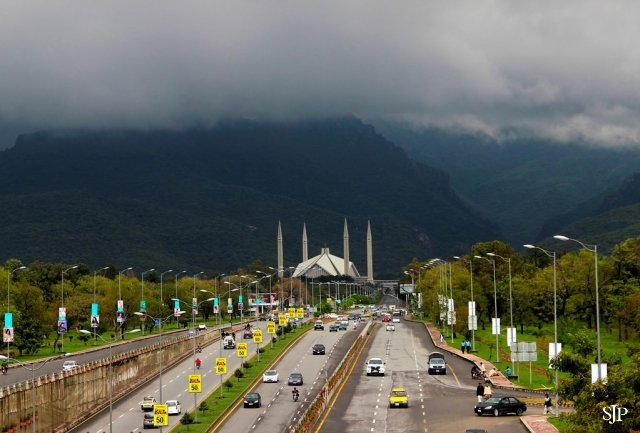